When your life revolves around the sea as ours does, you hear stories. Stories of deep sea monsters, mermaids and giant squids right out of a Moby Dick novel, are just some of the tales we’ve heard. Most stories about mysterious creatures we shrug off as ‘not bloody likely’, but others enter the realm of real possibility.

Over the years we have personally seen our share of magical and mystical creatures on dives, but most have been previously documented. We consider these rare sightings perks of the trade. While diving with friends off the coast of Baja, California, we had the unique pleasure of swimming with Whale Sharks. It would take the biggest tow truck St Louis MO had available to haul this magnificent creature on land. Yet these 40 foot harmless “monsters” glide effortlessly through the tropical waters filtering plankton as they go.

Stories of the deep.

Thalattosuchia
During an attack on the British transport ship, the SS Iberian during WWII by a German U-Boat, crew members of the German boat reported seeing a reptilian-like creature surface after the transport sank and exploded under water.

The blast threw the animal eighty feet in the air for the crew and German commander to see. Shaken by the explosion, the creature displayed four legs, an alligator type torso and a long narrow crocodilian face. Nothing like this had been seen before and the men who witnessed the event gave official military documentation as to what they saw. 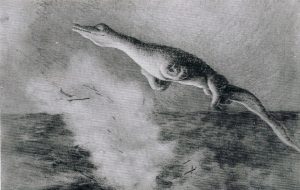 Since the sighting, so many decades earlier, no other official reports have been made. It has been theorized that what they saw was a relation to an extinct gigantic sea crocodile called a Thalattosuchia. (say that fast three times). I wouldn’t want to run into one of those on a dive – but chances are slim since we don’t go that deep. Besides we have a policy to leave sleeping giants at rest.

Megaloden
Unofficial sightings of the Megaloden have been reported as recently as this past century. More recently, however, in 2016, a day after Hurricane Matthew hit the eastern seaboard of the US, a couple walking the shores of Northern Myrtle Beach found a 5-inch-long shark’s tooth. After examination, scientists reported it to have belonged to the “now extinct” Megaloden Shark. By comparison the largest tooth of a Great White is about 3 inches. 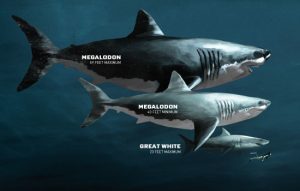 The Megaloden was massive measuring up to 60 feet long and weighing in the neighborhood of 19 tons. I realize how vast our oceans are, containing 99% of the living space on the planet. However, keep in mind that only 10% of that space has been touched by human exploration.

Bloop
This deep sea mystery gets its name from its sound. There have never been any confirmed visual sightings of an animal or what caused the bloop, only auditory imprints. During the Cold War the US stationed sonar devices in the waters off the coast to detect Russian submarines encroaching on marine space. After the war ended, the devices were left in place to be used by aquatic research scientists to learn more about our oceans. 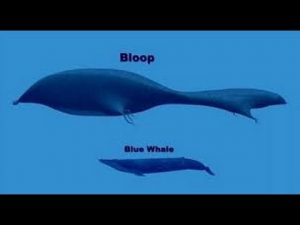 On more than one occasion a large booming sound resonated throughout the water and by all indications registered as marine life.
Although it had an animal signature, the sound was so bizarre that as a possible explanation scientist reported it as huge ice masses falling into the sea from the northern ice fields. Who knows, but Bloop is a good name considering this sound could be one of Mother Nature’s mystical bloopers.

Join the conversation. Leave a comment below telling us and our readers about the most intriguing sea creature you’ve encountered.